Kyle Kulinski is a progressive Democrat who runs a political channel on Youtube called “Secular Talk” where he gives his opinions on current news and political rhetoric. I sometimes tune into his channel and agree for a while, but except when he takes a utopian position on how we should speak kindly with dictators.

At 12 minutes in Kyle Kulinski says he wants to have a good relationship with Russia “to prevent world war 3.” I see this as a slippery slope, and find it rather disgusting. No matter what happens, there would still be a red telephone, just as there always has been. We can afford to take more confrontational stances than we already have, and to not appease thuggish dictators with gentle rhetoric without causing another Cuban Missile crisis.

Liberal democracies shouldn’t get along with Putin, anymore than liberal citizens should get along with fascists. I want condemnation of Putin, and I feel proud when my leaders do it. Furthermore, I consider it necessary and useful for America to lay out our ideological opposition to totalitarianism all the time, because our country believes in democracy and self-determination. It is in also in America’s geopolitical best interest to speak that way, as a voice of moral clarity, and then to strive for a liberal world order.

Appeasement can be just as dangerous of a slippery slope as saber-rattling. Our politicians can manage to criticize Russia or North Korea honestly, and even put sanctions on them without worrying that it’s going to bring about a war. Russia deserves to be credited with some trust; after all, they did possess enough rationality to not start WW3 during or since the cold war!) Kulinski doesn’t have to be so dogmatic about pacifism. He is free to position himself as an isolationist who opposes American intervention abroad, and who still expects his leaders to stand up for democracy abroad by criticizing Russia–which is the minimum liberal politicians can do.

While Kulinski has not been consistent about standing up for liberty throughout the word, he has been consistent over time about taking a cultural relativist position on liberty. I mean to say that he has been too willing to compromise his “liberal” principles for my liking, like when he had to attack Christopher Hitchens, (something I’ve already rambled about earlier.)  At one point in the video titled “What’s Your Take On Christopher Hitchens?,” he accused Hitchens of “losing his mind near the end and siding with the Neo-cons,” which he emphasized as though it were a swear word. To me it sounded almost like an ad-hominem attack, and like something you’d say to appeal to partisan viewers. (The fair thing to do would be to approach Hitchens’s position in the spirit of charity, avoid cheap attacks on his association, and to more directly attack his position.)

It’s very difficult to argue against Hitchen’s idealism. You can oppose the war in Iraq for many pragmatic reasons, but Hitchens’ position is the more moral one because its foundation is universal liberalism, which Kulinski still hasn’t realized.

Sorry Kulinski, but the best interests of America’s citizens requires moral idealism, and not just fluid diplomacy and free markets. If you want there to be good countries even if America falls then you have to fight for democracy everywhere you can. I say this under the presumption that “the veil of ignorance” should be a principle guide for how all citizens on Earth consider politics.

END_OF_DOCUMENT_TOKEN_TO_BE_REPLACED

I’m writing this for a lot of reasons, but one of them is that I don’t agree with most of Sam Harris’s fans that Islam is the largest immediate threat to the USA. The context is that right now thr [Russian] Christian white supremacist party is trying to dismantle democracy and to increase their long-term control over 3 branches of government, and are a much bigger threat than the 2 percent who are Muslims in the USA. I think Sam needs to focus on the real elephant in the room, and wait a few years before he spends most of his time attacking Muslims again. We can handle a 1% increase in Muslims if we can just save this republic and either reform or marginalize the GOP.

I think his center-left fans have largely left him to focus their resources on economic issues and opposing Russia/China, (which realistically requires retrenchment from the Middle East.) Meanwhile his circle of friends has become mainly conservatives from the “intellectual dark web,” and over time many of his fans became racist conservatives. For that reason I can no longer stand most of his fans (which includes people on the /samharris/ sub,) because I disagree too much about the best strategy for fixing the USA by popularizing enlightenment ideas.

Sam Harris’s laser-like focus on Islamists, and the vicious SJW versus anti-SJW fights on social media sites have clouded many atheists’ judgement about the most pressing dangers in the country. (For now I’ll let you imagine which problems are being neglected.)

….I think he is distracted, and distracts others by talking about the wrong things at the wrong time. He does oppose Trump the person, but he doesn’t disagree much on his general policy of limiting immigration. Too many immigrants can be a problem (illegal or Muslim), but there really aren’t that many in the population, and it’s not nearly as big a problem as the kind of conspiracy thinking that has become mainstream in conservative circles.

He also doesn’t really criticize the military-industrial complex, and hasn’t faced the reaity that it’s no longer 2002 and the unipolar world is no more because Russia and China are emergent militant powers. American influence and power has declined in the Middle-East since the Hitchens era when neocons could afford to intervene anywhere, and it’s too idealistic to continue to talk about nation-building and leading the fight against jihadists in every new country that needs help. (Right now we are fighting for limited gains in Afghanistan, Iraq, Syria, Somalia, Yemen and Libya,) while own infrastructure crumbles.

I also don’t think he’s a jackass, just misguided. I think Hitchens with his more political background would have had to concede by now that we need to put the war on terror on the backburner and fix our democracy. To this day Sam Harris would still rather vote for Hillary Clinton than Bernie Sanders or someone who wants to focus on the economy. Just like Hitchens in the years of abundance, he said in 2016 that he’s a single issue voter for the war on terror. Hypothetically, unemployment could hit 30% with no wage increases, and Christian Nazis could takeover the GOP, but meanwhile Sam Harris would still be talking about voting for whoever will fight Islam.

It’s because they have been taught by Marxists, and don’t actually have a good understanding of world history, world politics or game theory. They think problems will sort themselves out in the absence of a hegemony that can broker the peace. Take Europe, if the United States hadn’t backed the EU, pressured Europe into giving up their colonies, and enforced a monopoly on force on the continent, then the culture would have stayed the way it was and been more nationalistic. There would have been arms races between competing great powers all over again, as there had been major continental wars ever 40 years for 3 centuries. This time it would have been cataclysmal. There would be no power of last resort to prop up the United Nations, and therefore there would be conflicts throughout the Balkans, mass genocide in the region of Yugoslavia, and a war between Turkey and Greece.

Or look at the Middle East. In the absence of the United States or Russia, Israel would be at war with every one of its neighbors who would all have to spend more on their self-defense instead of economic development. The epic Sunni-Shia struggle would have turned hot more often than it has. Egypt would be run by an aggressive socialist similar to Nasser. Pakistan would be at war with India. Jihadists would be everywhere.

Most European politicians understand the vital role of the United States in preventing international anarchy and nipping arms races in the bud by amassing overwhelming force before they can begin. The governments want the United States to remain the dominant power on the European continent. They won’t ever try to build a sizable military when the United States can do it cheaper, and handle world conflicts better by tapping into economies of scale. Politicians merely attack the United States because it’s politically expedient, though it hurts the alliance. They know appealing to base nationalism and blaming a foreign power will score popularity points with a population which doesn’t need to think things through, and that understandably resents the feeling of having less say in world affairs.

“You know what I was thinking about today? I was thinking about those street gangs they have down in Los Angeles, those Crips and those Bloods. And I was thinkin about that bunch of new laws they came up with in the 1980s, I think it was, to combat those street gangs, those Crips and those Bloods. And, if I remember rightly, the gist of what those new laws were saying was, if you join one of these gangs, and you’re running with them, and down the block one night, unbeknownst to you, one of your fellow Crips or your fellow Bloods shoot up a place or stab a guy…well then, even though you may not know nothing about it and even though you may have just been standing on a street corner, minding your own business..what these new laws said was you’re still culpable. You’re still culpable by the very act of having joined those Crips and those Bloods in the first place. Which got me thinking, Father…that whole type of situation is kinda like you church boys, ain’t it? You got your colors, you got your clubhouse. You’re, for want of a better word, a gang. And if you were upstairs smoking a pipe and reading your Bible…while one of your fellow gang members is downstairs fucking an altar boy, well…Father, just like those Crips and just like those Bloods, you’re culpable..cause you joined the gang, man. I don’t care if you never did shit, you never saw shit, you never heard shit. You joined the gang, you’re culpable. And when a person is culpable to altar boy-fucking, or any kind of boy-fucking, cause I know you guys didn’t really narrow that down…then you kinda forfeit the right to come into my house and say anything about me or my life, or my daughter or my billboards.. So why don’t you just finish up your tea there, Father, and get the fuck out of my kitchen.” 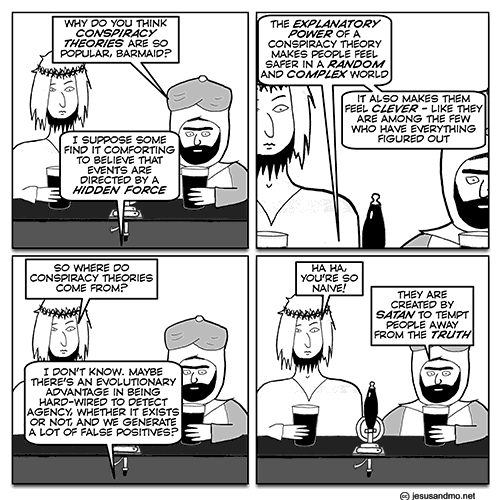 There’s so much that is evil about religion and so many atrocities commuted in its name that there’s not much left for me to say anymore, other than that we must fight this ultimate evil.

Metal Gear Solid Meme, it went off the rails in MGS2, MGS3, and MGS4 after they had to 1-up Ocelot. 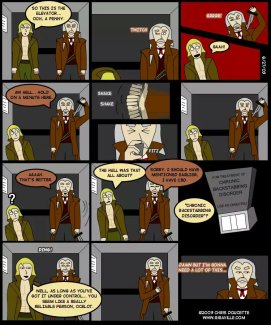 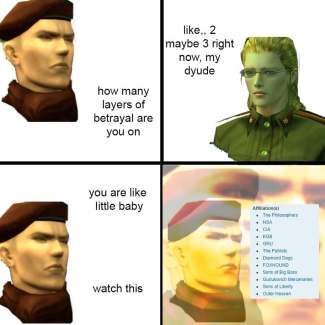 Give this tool to any morons who say global warming is a myth. It lets you compare how hot your hometown is compared to when you were born.